Has anyone tried making their own steam canopy? 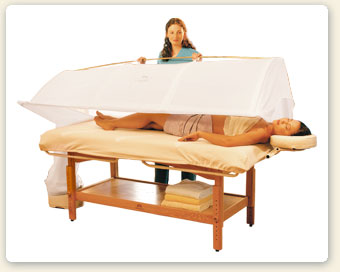 Replies to This Discussion

Hi Crystal... I love your steamy wonder design. Where did you get your wooden hoops from? I've been searching and searching for them but can't find any large enough (they seem to exist for drums and quilting but not much else?)

Well, I found that you don't need an expensive steam generator, when you can just use an kind of food steamer set on high. All steam generators are is heating water to it's boiling point to create steam, which is exactly what food steamers do and you can get them for $16.

Then all you need is three long dowels, a foot longer than your massage table, two wooden dowel hoops, cut in half, Velcro, tent cloth, needle and thread, mini fan, thermometer and some time. All this for less than $100 - $200. I don't know how they get away with charging so much for something so basic.

They even charge $30 for their hanging apparatus, when all you need is a few hook eyes and string.

I'll be making a more detailed blueprint with actual dimensions and prices later.

I want to thank everyone who has posted their comments. I have personally not been in a Steamy Wonder however that is exactly why I am going to do more research and also try to make my own first. I believe I can make one of a higher quality. I will let everyone know how it turns out. If anyone has more tips, please do share! Thank You!

OK so tomorrow it's time to get out the sewing machine and supplies to make my own version of A steam canopy that doesn't look anything like the one made by steamy wonder. I will take pictures and keep a journal of how it's made and how it works. I've built structures for 3 day wood fires for ceramics and built homes for Habitat for Humanity, as well as sewing some pretty outrageous outfits and more. The biggest decision will be the material. I've climbed the Grand Tetons a few times so I know a bit about materials that will withstand moisture and mold........... I'll keep you all informed. I'm just tired of using flannel sheets and towels,

Still trying to come up with the best material. I need a light weight tent material to hold in the heat, but don't want a bunch of large hot steam droplets falling on peoples bodies. I also found other materials for bends as large wood hopes were nowhere to be found..... Getting there slowly. If anyone wants photos please email me at thexashealingarts@gmail.com

This conversation has been going on for a while.  But, I thought I would chime in and say that I have a Steamy Wonder tent.  I got it a year and a half ago during a "sale".  So, it was $1100, plus I spent an extra $100 for a professional carrying case.  Based on my experience, I would say you all are correct that it is overpriced for what it is.  Not that it is a bad thing.  I actually love the steam tent.  I was inspired to get one after experiencing it with a massage while in Costa Rica.  It's quite wonderful, actually.  But, it is a lot of money, and I believe, with the right know how and the time, one could probably make one of similar quality.

That being said, I am actually planning on selling mine.  I will be posting it on ebay in the near future for half of what I paid ($600).  While I like the steamy wonder, I am not using it as I thought I would.  I changed directions in my life a bit this past year, and am not doing as much private massage work as I had originally planned.  I have used the steam tent 3 times, so it is practically new.  As some people have pointed out, it is big and a bit cumbersome to store.  I actually keep mine folded up in the carrying case, so it takes up less space.  However, if you use it frequently, you would not want to do such a thing.

As a steamy wonder owner, I would be happy to answer any questions people may have about it.  Or, if you think you might be interested in mine, stay tuned on ebay!

Permalink Reply by Patrice Roisman on June 14, 2013 at 12:46pm
Hi Indigo. I'm a 40 veteran if NY. Manhattan and Woodstock. Tried finding your contact in upstate to ask you a few steamy wonder questions. Except for the sail cloth / tent material I've built the framework, so before I invest any more of love to find out about buying yours. My practice is on my land with the massage room being my X master bedroom. I'm 62 and massaging for 12 yrs. I love doing Scrubs and wraps more instead of just the sports work. Give my aging body a break. We can converse more via texashealingarts@gmail.com
Thanks
Patrice Roisman
www.hillcountryhealingarts.com