Is it the truth ?  I think it’s false advertising, and good marketing.  Actually brilliant marketing.  Because it’s what a great many of the general public believe to be true.  It’s accepted as fact by many, that subluxations, misaligned vertebrae cause those problems listed on the illustration.    Hmm ...  I’m not sure?

What I do know for sure though, is that trigger points do cause those problems.    And that muscles move bones.  As the second illustration indicates.

What do you think? 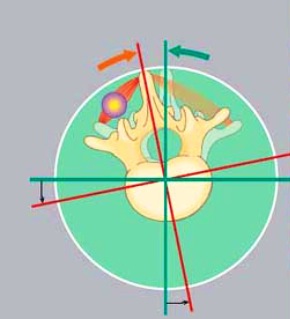 Replies to This Discussion

Of course there were and are those that I couldn’t help.  A lot of patients I can’t help.  If it’s not myofascial, manual therapy is limited.   But there was a new patient a few days ago. He was finally referred to our clinic by another medical doctor.

He had low back pain that wrapped around the right side down into his groin area.   He tried chiropractic, massage, and physical therapy for a year.  His pain was just getting worse.  So now he is in a serious pain clinic.

The doctor that first examined him came into my room and wanted me to check the new patient out, because he suspected there was a myofascial component to the patient’s pain.  But he wasn’t sure because the guy had already tried chiropractic, massage therapy, and just finished two months of physical therapy.  With no help what so ever.  And his pain was getting worse.

Some think I come in here to brag.  That I’m full of myself.  I’m just coming in here to make a point.  The physical therapists had him exercising.  The chiropractor - crack crack crack.  And I don’t know what the massage therapists were doing?  The guy never really had a problem.

I see that same scenario over, and over, and over again.  Day after day.  Week after week.  Year after year.  So I write in here about it.  And sense I’ve found a very effective way to eliminate trigger points.  I write about that too.

As a side note.  I thought that working in a medical clinic, with a team of medical doctors, would lend professional credence to our profession.  But I have found that as far as insurance companies go, that’s not the case.  We have had many patients who’s insurance will only pay for massage if it’s done in a chiropractic clinic, in conjunction with a chiropractic adjustment.

The chiropractic industry must have a huge lobbying force to be able to insert themselves and control our profession like that. Our licensing, and recognition as real professionals will mean little until that’s changed.

In effect it’s blocking our move into the medical world.  I find that very interesting.  But, nobody seems to care but me. In this video, is an example of muscles moving bones as seen in the illustration to the left, maybe?

I have found out that if you are able to take out lateral spinous pain, there is often a great benefit to the client/patient.  The procedures I’ve learned and discovered allow that to be done quickly and easily.